Some people call him the loudest person in Wobbletown, but I would call the man a purist. They say any great structure starts with a solid foundation and an outfit is no different. A strong footwear choice should set the tone for any outfit.

When it comes to Mr. Noisy, his unwavering belief in his choice of footwear* is so strong that he sees no need to dress the look any further. Why complicate matters with clothes when shoes alone can do the job? This obviously requires supreme self confidence in one’s body, but for those of us who don’t share this quality, we can take inspiration from an approach of simplicity. Let stand out items do the work and dress simply around them, because if everything is talking at once, things can get a little… noisy.

* I would identify Mr. Noisy’s shoes as a C-Shade Tricker’s Keswick with a Storm Welt; ideal for tramping around the Fells and Munros of Happyland.

David Hockney has always been a hero of mine. I first saw his work at Salts Mill in Bradford around the age of 13. Among the overpowering scent of Lillies was an eclectic body of work ranging from the exquisitely observed and masterfully drawn, to the naively and graphically painted, via boundary pushing photo montages. Here was an artist who could seemingly do it all, who attacked every medium with creative vigour and excitement.

The thing that I fell in love with most about Hockney’s work is that once you’ve witnessed his incredible technical ability you know from that point on anything you see is exactly how he wanted you to see it. If a painting is childishly executed it’s because that’s how he wanted to convey it to you. His work is a total window into his imagination because he can realise his imagination physically. He isn’t capped by his ability. Experiencing the work at Salts Mill and my introduction to pop art at that age definitely helped form my own graphic eye and helped set the course for an interest in graphic design.

In later years as my interest in clothing and dressing has grown I’ve been inspired by another example of Hockney’s creative eye; his wardrobe. On his person Hockney wears clothes that are totally in tune with his art. In his prime his combinations of clothing were a saturated version of everyday colours and patterns. A pin stripe, but a super pinstripe. Not a soft blue but a candy pink. Normal, but the exaggerated version of it. In the 60s and 70s this approach was supercharged. 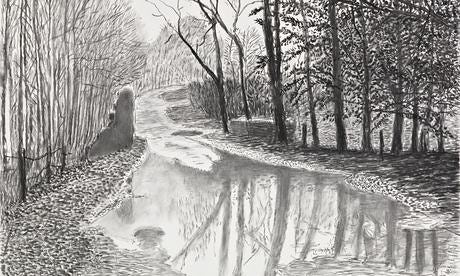 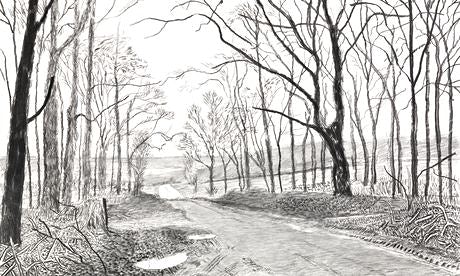 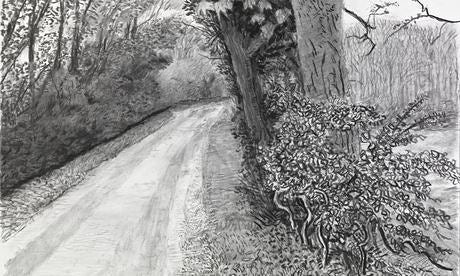 For me, his dress sense was in its prime in the eighties. He’d hit his stride. Long gone were the days of the try hard 70s, where proving your sartorial expertise and taste was to wear everything at once. No need to peacock anymore in the 80s. The glasses were still statemental and iconic, but more refined than the chunky rims that had overlapped his face in the sixties and seventies when he was developing his voice and identity. The classic British sartorial eccentricity is displayed in my favourite picture of him that leads this article – red socks and patterned slippers start the party while up top horizontal and vertical stripes put him at risk of looking like an optical illusion. The pastel blue cardigan could be one colour too many, but Hockney’s relaxed confidence puts it all at ease. An outfit that feels ‘thrown on’ by someone with a great instinct for colour and pattern. Effortless. 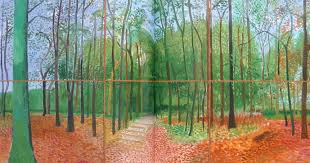 On to his later years and the harsh frames have been sacked, but my memory of them puts them on his face regardless. The power of such an iconic look. As an old man with nothing left to prove there’s little need to try too hard anymore. Echoes of his sartorial flair are present in carnation button holes and patterned braces, but there’s no time to worry himself too much about dressing when there’s so much painting to do and new techniques to embrace before his age catches up with him. Painting in fine suits has rarely looked more comfortable. 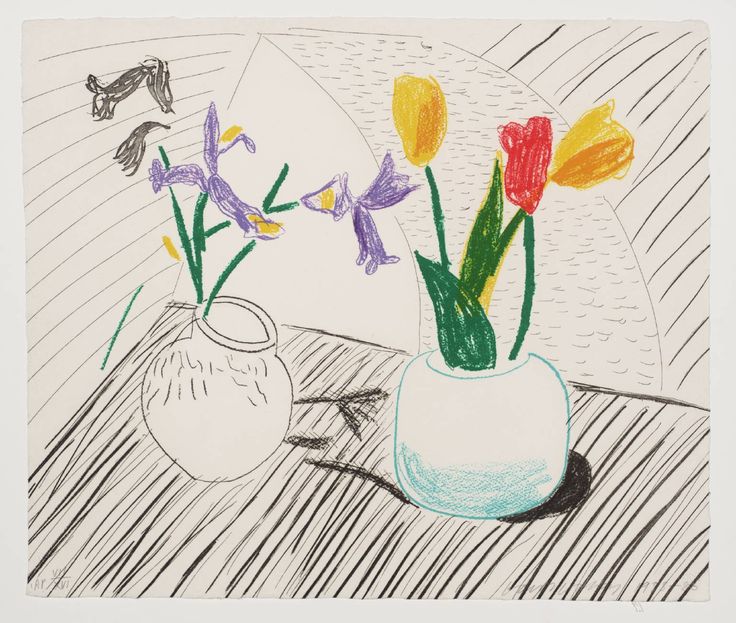 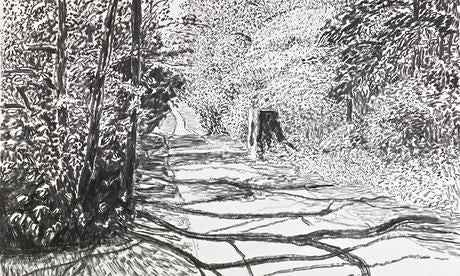 One of the reasons I like Hockney’s wardrobe and dress sense so much is that its always reflected him and where he is in his life. He dresses to suit his age and experience without ever losing his sartorial flair. It’s an outward reflection of his personality by an artist who’s always worn his imagination on his sleeve.

I’m trying to keep the Golden Garb choices varied and vaguely seasonal. So with desert based oil drilling and Christmas crime fighting behind us we move on to summertime beach loitering and the first ‘real’ Golden Garb entry; Mr Dennis Wilson.

The darker sides of Dennis – from his tragic involvement with the Manson Family, the heavy drinking and pot smoking (which damaged his voice to gravelly perfection – see/hear Pacific Ocean Blues), to the alcohol abuse that would lead to his premature death from drowning – all contribute to form a complex and intriguing super dude that is often overshadowed by the legacy and immense talent of his brother, Brian.

But rather than this being a mini-biopic of the man I’d of course like to focus on his inimitable relaxed style. There aren’t many gents that can get away with such high waisted pants and still look 110% cooled out with the situation. And not many people have donned Hawaiian shirts with the same degree of sincere causality before or since his Pacific Ocean reign. Team all that up with a Grizzly-Adams-Mountain-Man beard and you’ve got a winning combo on your hands that can even chill a tuxedo the-fuck-out.

So with many brands ‘reviving’ the Hawaiian shirt this season and some fine examples out there already, I thought it would be good to take a leaf from Dennis’ book to show how to wear ‘em loud whilst playing it cool. Here’s a variety of Dennis vs The Hawaiian Shirt images with some recently available latter day options from Stitched & Stitched favourites; Engineered Garments, Levi’s Vintage Clothing, Monitaly, Our Legacy, and Woolrich Woolen Mills.

PRESENTING THE ARGUMENT FOR ENDURING QUALITY