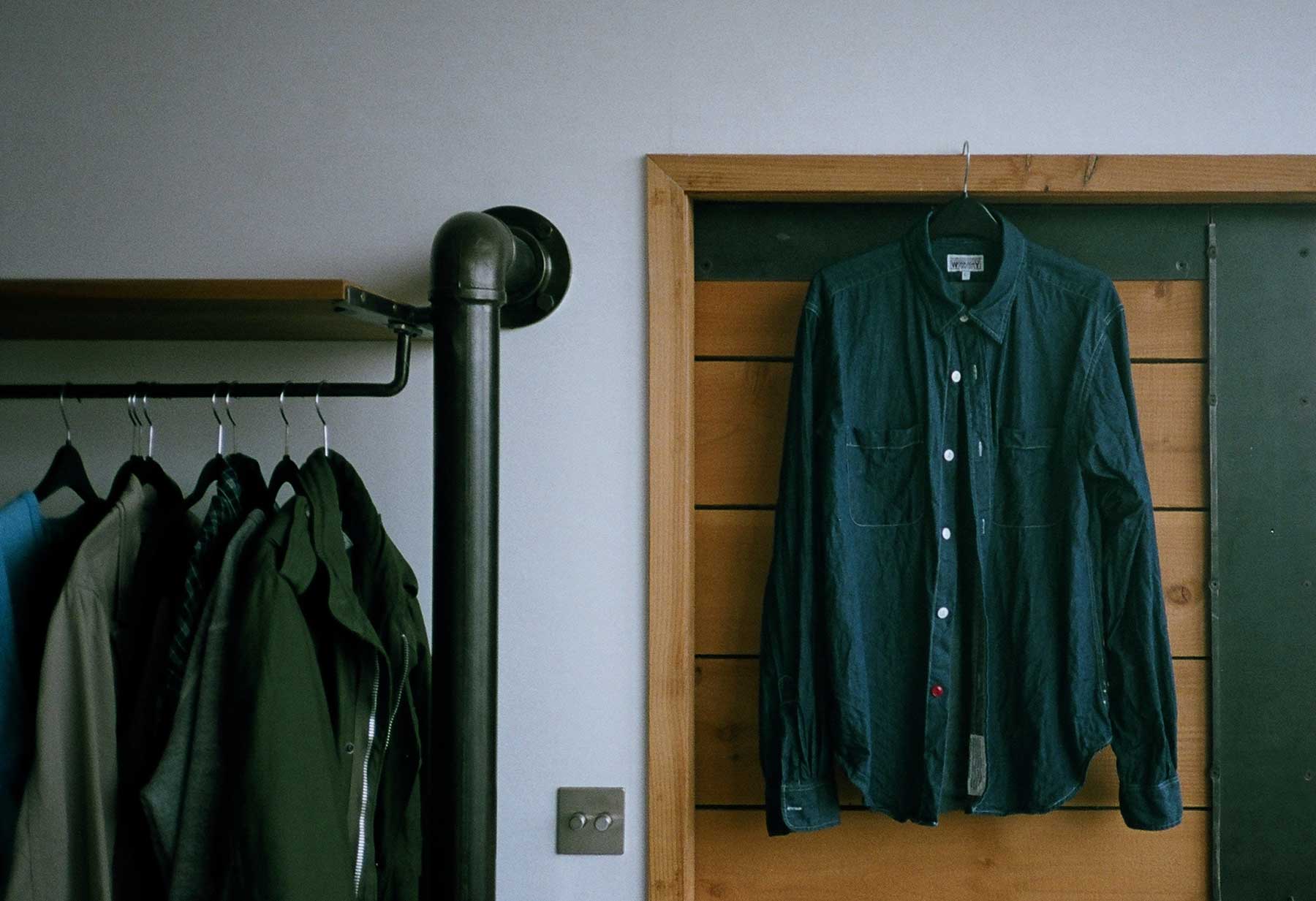 Earlier this year The Bureau got a good update of E.G. Workaday stuff in, with a couple of new styles added to the offering. I made a few purchases from the selection; the Lafayette shirt, the Everyday shirt, and the crossing crew tee, which for the most part has been my uniform all summer. The Everyday shirt, pictured above, has become one of my favourite E.G. shirts. It’s a stripped back version of the mainline Workshirt, with simple chest pockets rather than the mismatched button pockets of the original. The indigo denim is washing really well and has started to get a nice fade on it. I’m also looking forward to picking up some of the more colourful chambray versions on offer sometime in the future.

The jewel in Engineered Garments shirting crown would certainly have to be the 19th Century BD Shirt for me. It’s one of their staple garments that appears each season and like their other shirts has only a few subtle, but distinctive details that set it apart from the crowd.

Along with the Rounded Collar and Tab Collar shirts it’s one of Engineered’s smarter, preppier shirts, but unlike those aforementioned styles this shirt is simpler and can generally be worn more casually.

My obsession with this shirt has been gathering momentum recently especially with the new Autumn/Winter items arriving in stores in testing floral prints. The BD shirt is often Daiki’s playground for using some of the more garish madras, plaids, and checks, offsetting the simplicity of the shirt style and setting it apart from more traditional button-down offers such as Gitman, Ralph or Brooks Brothers.

Another reason is I’ve recently bought a couple of the Workaday versions of the shirt which are good ‘all rounders’ produced in great quality oxford cloth in simple colours and patterns. I also find the cut more pleasing than the mainline version even though it’s necessary to size down for Workaday. For those interested, the Workaday shirts (which are also significantly cheaper than the mainline equivalent) can be found at The Bureau Belfast.

Other features that set this style apart are two large curved plackets at the bottom of the shirt making up for it’s distinct lack of buttons down the front and giving the style a more ‘historic’ feel. I’ve heard some people complain in the past that the shirt’s buttons cease too early as the last one is around the naval area. I really don’t find this an issue with such exaggerated overlapping plackets – the shirt always looks neat and tidy when tucked in and I’ve never had an issue with it splaying open at the waist band. I find the bigger issue for smarter occasions (like all E.G. styles) is the incredibly high hem, but it’s another payoff for the more casual untucked approach.

One last detail I’d like to discuss is single needle tailoring, which is generally considered superior to that of twin needle/chain stitching for a few reasons; the seam lays flatter than chain stitched seams, looks cleaner, and is less prone to puckering after washing. Single needle stitching is also every bit as strong as twin needle as there are still two rows of stitching, but one is hidden inside the fabric. It is, however, more labour intensive to produce which is why it’s generally only found on higher quality dress shirts. Single needle tailoring can also be found on the Rounded Collar shirt.

Alongside the Workshirt, this is certainly my favourite Engineered Garments shirt style. My plan is to, style by style, take a more in-depth look at Engineered’s shirting styles in future posts.

PRESENTING THE ARGUMENT FOR ENDURING QUALITY